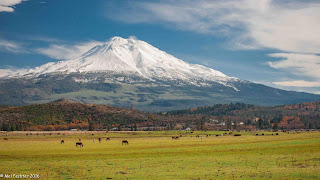 The co-founders of The Angel News Network have been led to initiate two sacred journeys to one of the most powerful portals/vortices on our planet: Mt. Shasta, located in Northern California.
The meaning, value and purpose of these sacred journeys were for us to serve as proxies for humanity in order to assist our planet and ourselves to evolve into a higher vibration/frequency of existence (our divine destiny).
While there have been many spiritual journeys throughout our world history, ours were unique missions to balance the masculine and feminine energies, giving and receiving and to join energies from above (archangelic) and below (Inner Earth).
The first journey took place mid-May, 2010 and the second mid-August, 2011. The high priest of Lemuria, Adama (Father of humanity) initiated these sacred journeys, with Archangel Michael creating specific locations and rituals to be performed upon this magical mountain. These rituals performed by us would affect our planet and peoples by increasing our vibrations, thus consciousness…moving us from the unhealed me to the healed we (consciousness).
The Angel News Network publication COMING HOME TO LEMURIA, AN ASCENSION ADVENTURE STORY, is a detailed narrative of the first mission. By reading this interactive reenactment, you become a proxy, as well.
http://theangelnewsnetwork.com/page22/book-comingHome.html
The second journey was a merging of the first, connecting the original work done with the new. This allowed an activation of all energies.
Since these journeys were completed there have been many inner-connected dynamic portal/vortices openings/activation/shifts within our religions, governments, cultural, and university structures throughout our world (12/12/12, 12/21/12, 12/25/12, etc).
Our planet and we within and upon her body are now experiencing the final 2,000 golden age cycle of ascension into a higher frequency of existence eternally connected to Source and Oneness.
We are humbled to choose, as part of our soul plans, and to be chosen to be of World Serve during these extraordinary times.
The Light of Source Never Fails,
Phillip Collins/Jeff Fasano/Joel Anastasi
Co-Founders of The Angel News Network

Posted by The Angel News Network at 7:55 AM No comments:

I AM WOMAN HEAR ME ROAR!

Actually, that is a line from an old Helen Reddy song from some decades back, as some may remember. But it captures perfectly a message St. Germain is sending mankind in new teachings from St. Germain that the Angel News Network intends to publish this year.

St. Germain, as most of you know, is the Ascended Master charged with guiding mankind during this new 2000-year Age of Aquarius. He tells us he dictated important passages of our founding papers to our Founding Fathers.

In my interviews with him, here is what St. Germain had to say about the hundreds of women protests that exploded around the world after Donald Trump’s inauguration last week as president of the United States.

“What a joyful moment for we in the ascended master realm to feel the divine feminine energy unlike ever before within the history of this particular planet joining hands and hearts and saying to the masculine, enough!

“They (women) have had enough. This is the breaking point for the feminine energy, which will be led by the Western World, particularly in the United States, which is destined to be the beacon of the light of the world. These women will now give courage and inspiration to all the other women of the world because of your communication systems. They are beginning to wake up and realize their separation, their subjugation and that the masculine energy is telling us what we can and cannot do and who we can be, and that is coming to an end.

“It will be the women of the world that will lead the planet and this nation into its light. The masculine energy has had their day within it. What you are seeing within your new government, recently inaugurated, is the Old Boy’s Club, the white men’s boy’s club coming forward, are you not? And the women are paying attention to this. They are seeing this and they are rallying, they are protesting, and they will create a parallel existence, a parallel choice to the old, with or without the approval of the old paradigm.”

HUMANITY’S ASCENSION AND THE ROLE OF THE UNITED STATES

“There is so much happening within your United States. This chaos is a preamble to the clearing and cleansing which are necessary for these United States in order for you to fully embrace your divine mission of being the light of the world.

“In the ascension process you are in the process of becoming a nationless world. From the Archangelic Realm of Uriel you were gifted with cyberspace, the Internet, so you could free yourself from any national, economic, political or communication control. You are being given an opportunity to see yourselves as one world, one being, and all of you being each other in disguise in order to see the diversification of the oneness which is the mission of this planet—to learn to love through all of the diversity of creation.

“What you are experiencing now is sort of a step backward brought about by the hidden forces which have been controlling your world—your so-called Illuminati, the so-called Cabal. What you are having is their attempt to keep you in separation in order to keep you divided from one another, in order for them to continue to try to control what they have not created.

“This is an ‘old guard’ government acting as a proxy for the clearing and cleansing of all that needs to be cleared and cleansed to protect the principles of Democracy, not to force this on other nations who may or may not be ready for it but to insure it for a nation that is.

“You still have a majority of your population that chooses not to vote. It is time for your populace, if they so choose, to wake up to realize that if they really wish the popular vote to win, then all who care about themselves and their nation must show up and exercise the gift that so much of the world is fighting for at this time. It is not to be taken for granted.

“Much of what you are experiencing now is because of the apathy and the lack of involvement of the populist individual. What is needed at this time is to move from the individual into the collective consciousness of the unified force field to protect the principles of democracy which are an amalgamation of everything that has worked and hasn’t worked on this planet in the past.

“I wish for you to know, believe and wholeheartedly trust and surrender to this truth:

“No matter how things are transpiring in your world, the foundation and the checks and balances and the Founding Father Papers that you have--that we assisted in the creation of for the United States--will hold firm. This time is a wake up. This time is an eternal final exam, an eternal final exam for humanity to understand the choice of democracy, the choice of allowing we the people, by the people and for the people to work full heartedly in this country. And that requires the full participation of everyone and to allow that to ratchet out into the world as a whole. That is the hope and the promise of the Ascended Master realms.”

(If you resonate with St. Germain’s message, please share it far and wide!)