THE ANGEL NEWS NETWORK: A CHANCE FOR CHANGE 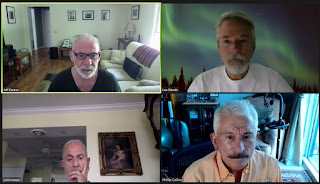 THE ANGEL NEWS NETWORK: A CHANCE FOR CHANGE

Because much of our world has lost it realization, almost three decades ago four men still today carry on the mission of The Angel News Network (ANN) to share a new vision of truth achieved through self-empowerment. Our endeavor is independent of the herd, not confronting the existing religions but building a parallel path moving beyond them.

Connecting directly with the Higher Realms (Archangels, Ascended Masters, Star Beings to name a few) these elevated Beings share a universal pathway to human destiny, free of judgment and control, honoring our free will and choice.

Our ANN hearts are telling us what we are being and doing to feed a huge human hunger; a direct source of new, refreshed values where you create your own vision of truth (through your resonance and discernment) and your own power of choices.

How many institutions can stand this test?

We are offering new, actually ancient, research for a universal formula of ascension and integration to create lives and a world of equality, harmony and balance.  Needless to say, this will not be easy to fit this into the old patterns which are rigid but the forces of creation who created our world and we humans are determined to assist us. It’s just a matter of accepting the help and applying it.

Although ANN is a small minority we are pushing beyond the barriers, opening doors to the Higher Realms and spiritual knowledge and preparing the evolution of humanity into a higher dimension of existence…..escaping this the densest frequency within the universal  plane.

In an age of consumer economy, conspicupous waste, abuse of our home planet, waging war, climate change, global pandemics, and exploring other planets we know it will require a mighty shift in our awareness (consciousness) to achieve the goals at hand. The change will be reached within each of us and then adjusted to the outer world. The is why the Higher Realms most often focus on our realtionship with our self; self being a reflecting of ALL THERE IS.

It is requiring a huge shift in our awareness and values during this age of noise and nuisance for the Higher Realm reality to become real for many. We need to shift from beating drums and dropping bombs on one another and our home planet to understanding we need one another to survive. We are diversified versions of one another; each other in disguise.

It is quite clear if we do not make a change in humanity’s direction, the state of the world and our lives is to become progressively worse. If we wait for the mass of humanity to reach a state of unity and aspiration strong enough to receive the Higher Real teaching and change the material conditions it could be too late.

But there is a possibility than small groups like ANN, and others may achieve a path from descent to ascent. It is not the size that matters. History shows that time and time again individual and small groups have associated for the purpose of initiating necessary changes themselves to create what those ‘in control’ could not or would not do.  Often isolated individuals/groups caused the ascent of government, religion, science and education.

Humanity grows when inspired by a high purpose while contemplating vast horizons.  There can be no more beautiful and dangerous adventure than the renovation of current humanity.  The fact that the work of renovation is likely to be confined to a small group is not surprising. For a group small, is capable of achieving much with the assistance of forces that created everything.

The Higher Realm beings do not impose and never force anything. They help us grow in the ways of spirit. It is an eternal law that there can be no compulsion in the realm of spirit; it is essentially a timeless world of free creative choices. Each individual is on their own journey of discovery, the Higher Realms are here to help; no one nor nothing can free another.

It has become clear that existing, large religions will not transform our times but new spiritual foundations can deliver us from the trauma and drama of current events. The needed shift can only come from small groups with the courage to swiftly move forward. Institutionalism and the Higher Realms have rarely been easy bedfellows.

Humanity at present abhors dogmatic postulates taken on faith; holding them valid only in so far as their knowledge-content seems in accord with their own experience. The Higher Realms teachings and tools are a way to open what has been blocked; direct connection. The false socialization and controlling tactics of religion has always been the chief cause if its failure to regenerate humanity. Christ rejected the Devi’s offer of the kingdom of this world but the church has succumbed to it. Through religions more people have been killed in the name of their God than any other organization on Earth. They have taught some people are not good enough to receive heaven or that women cannot be priest. Any religion that demonstrates these behaviors knows nothing of God.

It is time to put into practice, being into doing, what many religions preach. This requires us to free ourselves from man-made religions and know that the God-force of love lives and beaths within each of us.  We only have to discover it for ourselves, not through someone else who may intend to control us. The Higher Realms are directing us to that innate, cosmic love with no requirements from them except to love ourselves, thus one another. You may have heard this somewhere before. Now is the time to put it into practice with no attachments to an organization.  The only organ you need is YOU.

Humanity through religions has set itself to hate in the cause of love, to use compulsion in the name of freedom and to become practicing materialists for the sake of spiritual principles.  The falsehood of the old social use of religion is shown so dearly by it effects; unquestioned reign of cruelty, injustice and oppression with half spiritual light on the surface. It is time to create a new consciousness connecting to the Higher Realms replacing misplaced importance with truth and freedom and spiritual growth for the individual and the collective human race. This will allow the creation of a law of oneness.

We belong to ourselves, to society, the race, the nation, the world, and to humanity. In a deeper view we exceed the human formula and actually belong to creation itself and to the world of all beings that make creation. This includes the beloved community of the Higher Realms never giving up on us since some of them were once us.

The human mind cannot always really foresee, much less lay down the cosmic

evolve into a higher dimension/frequency of existence but the higher realms can.

The Higher realms propose that a spiritual life can be a normal life, not imposed on anyone.

All of which is being spoken here comes from a purity of the heart, a union of all of us, an embracing of souls. When our separate wills become one will we are thinking with our hearts and building a new paradigm of equality, harmony and balanced based upon universal love.

The planet is going to ascend into this universal love with or without humanity. What do we choose?

If this writing resonates you can learn more about The Angel News Network at www.theangelnewsnetwork.com.

Posted by The Angel News Network at 4:47 PM