Old paradigms have always been transformed into the new through the human creative process. Art is the creative tool of the human soul assisting humanity in advancing into higher states of existence, often freeing everyone from the world at present.
When humanity strips away the business of art, the status of art, the cultural importance of art, what remains and is revealed is a pathway to a new destination: humanity’s divinity. The left brain is the locus of feelings and senses, of order in a three dimensional world. Art marries these two in a unified field of all that is possible and probable beyond the present.
Throughout human history, the arts have often come under attack by those who wish to control the people, or have no idea of the purpose of art, or have art only express their point of view. Right now in the United States of America, the arts are enduring assault on the nation’s arts agencies. And yet it is the artist and their art that continues to bring truth and transformation into human lives.
Suppose humanity activated the self-empowering motor of the human creative process on the nation itself, giving creative thought the freedom to re-vision and revise what institutions and economies could be like if they were factored into the spirit of a joyful, problem-solving divine intelligence. What could happen? Here are six possibilities:
* The government would realize the planet is a living conscious being and make protecting her resources (her organs) a priority. The consciousness of the people would demand and command this.
* Humanity would let go of the old corporate paradigm of the work/employment model for participating in the economy and create new forms of ‘making a living’ that feeds human souls.
* Through artistic expression the need for stable communities based upon love, equality, harmony and balance would be the national standard.
* Reshaping mega cities where individuals unite based on what they can contribute, not separated by class, politics, religion and race would occur.
* Artistic expression would be an essential aspect of medical/healing communities, as well as educational institutions. 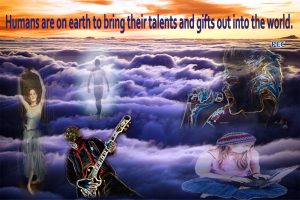 * Humanity would come to value artistic expression as much as any other human endeavor or achievement. Humans are on earth to bring their talents and gifts out into the world. Innate within being human is the need and ability to create and express.
The Divine Energy to transform human lives and the world into what humans say they want is held within the human creative process. Always has been, always will be.
Click Here For The Beginning
FacebookTwitterGoogle+Share
Posted by The Angel News Network at 6:07 AM